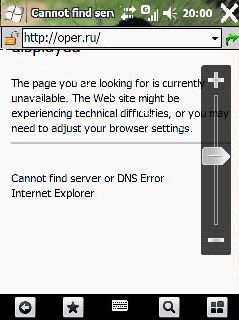 This new set of Windows Mobile 6.5 images also includes a look at the revamped Internet Explorer Mobile 6 (IE6-on-6, as Microsoft would have us call it), complete with a zoom-bar, navigational controls along the bottom-edge of the screen, and a transparent menu bar up top (like Vista, but not as cool). Mobility Site points out that the “X” close-button in the Mobile 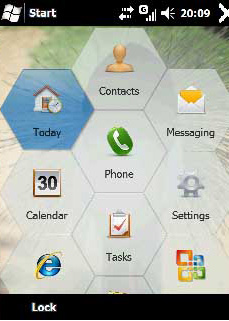 IE 6 screenshots looks like it could definitely use some spit and polish – Windows Mobile 6.5 is still likely undergoing last-second tweaks refinements before its unveiling on the world-stage at Mobile World Congress next month in Barcelona.

We want to believe that the touch-optimized honeycomb Windows Mobile 6.5 homescreen image will turn out to be a legitimate WM6.5 feature, but it’s hard to see that honeycomb design aesthetic fitting in with the rest of WM6.5’s more traditional UI-styling (more of an evolution on WM6.1 than a revolutionary update). Of course, there’s nothing stopping Microsoft from slapping a bit of finger-friendly makeup on the Windows Mobile 6.1’s menu-loving UI and calling it a day.

On the upside, it seems the fine code-monkeys over at xda-developers are ready to port WinMo6.5 to just about any HTC smartphone on market. Which is a good thing, because Microsoft is apparently making Windows Mobile 6.5 available on new devices only.

iWebTrack Lets you Obssess Over Site Traffic While on the Move

If you're the type who pops an aneurysm when the bounce rate on their site goes up 0.2% since yesterday,...