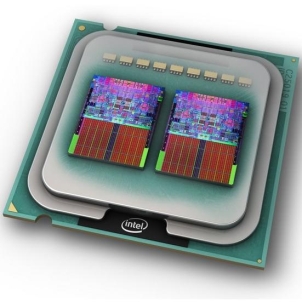 By now it’s an accepted fact that Apple has loosed a fleet of unannounced iPhones for real-world testing. And, true to Apple’s usually secretive ways, the new “iPhone 2,1” feature-set is still a mystery. But, that doesn’t mean we can’t speculate on what Apple has in store for the iPhone-loving world.

While the iPhone 2,1 might simply be an iPhone Nano intended to appeal to the lower-end market, we may soon see a next-generation iPhone hitting market with multi-core silicon and upgraded feature-sets in tow. Apple has been busy this past year making business deals that sets the stage for a completely customized iPhone handset – let’s take a look at what may be in store for the next-gen iPhone. 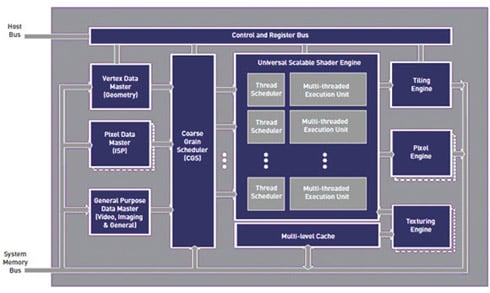 A look inside the PowerVR SGX architecture

A graphics powerhouse
The next major overhaul of the iPhone platform might just see the iPhone coming into its own as a graphics-savvy gaming platform. Apple has been confirmed to have licensed PowerVR graphics technologies from Imagination Technologies in a bid to turn the iPhone into a data-crunching and gaming phenom the likes of which dedicated gaming consoles would cower beneath.

It’s only a matter of time before we see Apple introducing these new PowerVR SGX graphics cores in an upcoming iPhone chipset.

Next-generation iPhone chips
As good as Apple is at designing trick hardware, they Cupertino-based iPhone maker isn’t a one-stop manufacturer. Apple still needs the help of third-party component integrators and suppliers to turn a particular tech-vision into reality. Case in point, Apple taps Samsung as its supplier for the iPhone’s ARM-based processor.

And, therein lies the next piece of our next-generation iPhone puzzle. Samsung recently entered into a manufacture-only licensing deal with Imagination Technologies. The deal allows Samsung to incorporate the PowerVR SGX graphics core into their ARM-based chips. Samsung provides Apple with the processing chips for the iPhone and iPhone3G, and Samsung’s PowerVR SGX license bodes well for Samsung’s future as the processing-chip supplier for the next-gen iPhone. Keep in mind, Apple licensed the rights to use PowerVR SGX technologies as they see fit and Samsung is positioned to manufacture the actual chips.

Chip design
So, how is all this going to come together? Let’s answer that question with another question. Remember Apple’s acquisition of fabless chip-design firm PA Semi? Right, of course you do. It’s been long known that Apple wants to go in-house for designing customized chip architectures. The company’s acquisition of PA Semi allows Apple to design their own customized processors and send the designs to a chip-maker – which is where Samsung comes in.

It’s not too far a stretch to see Apple designing their own chips, complete with PowerVR SGX technology, and Samsung standing by to put the specified gold on silicon. 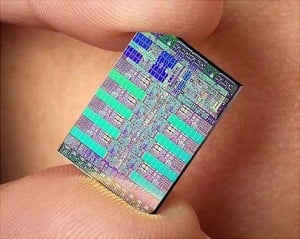 Multi-core
What’s important here is Apple’s motivation for wanting to have complete control over chip design. Simply put, Apple wants to incorporate multi-core functionality into future iPhone chips. And, the only way to ensure that future processors will meet Apple’s exacting standards was to buy their own chip-design firm and crank out their own chips. Customized chips would also help differentiate the iPhone lineup from most other mobile phones on market.

Apple recently announced their new multi-core, parallel-processing technology called “Grand Central.” The technology was developed to help future version of Mac OS X (like SnowLeopard) to more effectively leverage the multi-core processors that are used throughout Apple’s computer lineup. But, it has more far-reaching implications for the iPhone. The iPhone’s iPhone OS is based on the Mac OS and will likely work with Grand Central technology.

There’s also talk of Apple pushing to bring OpenCL to the iPhone. OpenCL was developed to help parcel out data into bite-sized chunks for processing by the hundreds of parallel processors inside a GPU (possibly provided by Imagination Technologies). Leveraging OpenCL technology could be another way for Apple to introduce multi-core computing to the mobile space. And, with Imagination Technologies’ high-tech graphics core in play, Apple is well positioned to pull the multi-core trigger.

A complete package
Going on the assumption that Apple has already begun development of the next-generation iPhone (and, really, there is no reason to believe otherwise), Apple is likely hard at work developing a new iPhone. The iPhone will likely sport a multi-core chip design that takes advantage of Apple’s parallel processing Grand Central technology, and incorporating the new PowerVR SGX graphics cores for enhanced graphics performance. And, with Samsung ready to answer Apple’s call for a custom-designed multi-core chip featuring the PowerVR SGX core, Apple’s plans for the next-generation iPhone look a little less mysterious.

The iPhone 2,1 may not be the multi-core iPhone that we’re all holding our collective breaths for, but there’s little doubt that Apple is working on a new iPhone with parallel processing power coming out the wazoo.

Say you're lost in the woods or some Arctic badlands and there's no one around to come to the rescue....