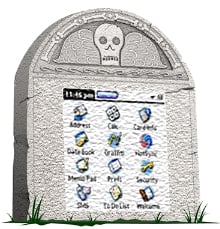 That’s it, Palm CEO Ed Colligan has just sounded the death-knell for the Palm OS.

Hold on to those old Palm OS-powered Palm Treo and Centro smartphones, they’ll be worth more in a few years as a collector’s item! Of course, we’re just kidding, but wouldn’t it be nice if the mobile world worked like the automotive world? Rather than ditching old, obsolete hardware on Craigslist, we’d love to see old handsets becoming antiques.

Back on topic, Ed Colligan, in speaking to investors about the Palm Pre and the Web OS, mentioned that the Palm OS is now official end-of-lifed. Colligan said that there will no longer be annew y Palm smartphones powered by the ancient Palm OS, and that Palm would concentrate their efforts on the Web OS and Windows Mobile. To be clear, Palm will still support Palm OS for at least the near-term future, but Palm will be taking Palm OS out of the product development cycle – essentially leaving Palm OS to die a slow death (some will say it’s been dying a slow death for years).

Colligan also touched on Apple’s multi-touch patents, reiterating that Palm was none too concerned about Apple’s thinly-veiled legal threats. Having 1,500 patents under your wing makes it easier to be non-chalant about potential litigation from Apple, it seems.

In the end, Palm’s move away from the Palm OS and towards embracing Windows Mobile and Web OS will likely prove a good move. The too-old Palm OS platform has been dragging down Palm’s image as a pioneering smartphone manufacturer. Shedding Palm OS might be the biggest factor, next to the Palm Pre and Web OS, that helps return Palm to its once mighty position at the top of the smartphone market.

SpinVox goes from strength to strength…

2008 saw a series of great achievements for SpinVox. Conversion numbers and revenues continued to climb as we completed 25...