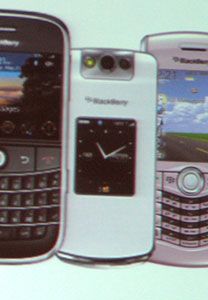 At the aforementioned RIM shindig there was what would otherwise be a throwaway slide featuring the front of a white BlackBerry Pearl Flip, apparently the same one we saw back in September. A picture of a Verizon BlackBerry 8230 in silver recently popped up, and this looks to be the very same CDMA Pearl Flip. Mobile World Congress is coming up next week, but all the RIM folks were telling me not to expect too much BlackBerry news there. Maybe CTIA Wireless in April…?

At a swell little shindig in New York today, RIM talked up BES 5.0 codenamed after the inert (i.e stable)...