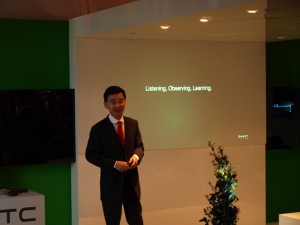 HTC took the Mobile World Congress by storm today with their announcement of the HTC Touch Diamond 2 and HTC Touch Pro 2 successors to the popular HTC Touch Diamond and HTC Touch Pro, respectively. But, the hardware wasn’t all that HTC showcased from their hospitality suite at the Fira de Barcelona. HTC, always the innovator and always looking to make the mobile experience as enjoyable and integrated as possible, has announced a host of new productivity features built in to the new HTC Touch lineup.

From intuitive information access to built-in conference calling features to push internet, HTC is looking to redefine the way we use our smartphones on a daily basis. Let’s start by taking a look at HTC’s people-centric philosophy for communicating with the people that most matter to you. The people-centric approach to communications is integrated into the new HTC TouchFLO 3D UI, providing a single contact view that aggregates a particular contact’s communications (emails, text messages, and voice call history) in one easy to use interface. And, the new contact view allows the user to interact with a contact’s communications history while on a phone call.

Lastly, HTC has announced “Push Internet” for their new HTC Touch handsets. With Push Internet functionality, HTC hopes to make browsing your regular webpages a less time consuming experience. Rather than wait for your favorite websites to load on your mobile phone, “Push Internet” automatically downloads the data from pre-selected websites every morning, so that the next time you pull up the webpage, the data is ready to go. It’s not exactly “push” data as we’ve come to know the term, but the “Push Internet” feature is no less impressive.

LG's press conference was severely lacking any kind of enthusiasm or spark, and that's putting it gently. Between yawns and...