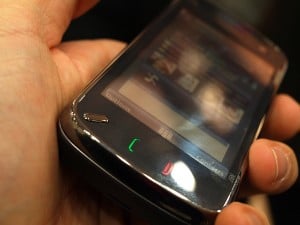 The Nokia N97 is undoubtedly the new king of Nokia’s Nseries-hill. With a feature set that boasts a 5-megapixel Carl Zeiss camera (with dual-LED flash), GPS, WiFi, 3.5-inch touchscreen, and 32GB of on-board storage, it’s clear that the Nokia N97 reigns over its Nseries brethren with confidence. And, after putting hands on the device at Nokia’s booth in Hall 8 of the Fira de Barcelona, we’re convinced that Nokia’s push into the touchscreen segment is going quite well (but it could be better… more on that in a bit)

From work to play, the Nokia N97 performs beautifully. Whether you’re taking pictures, surfing the web, or just tapping out an email, the Nokia N97 ensures that you have all the features you’ll need in a smartphone. The Nokia N97’s build-quality was superb – nothing like the Nokia N86’s incredibly solid construction and high-end material quality, but nonetheless impressive. The tilt-slide mechanism struck us as a little unrefined and somewhat awkward, but the sliding action was smooth and decisive. The Nokia N97 isn’t going to win any awards for slick industrial design, but if it’s a power-packed QWERTY smartphone you want, the Nokia N97 delivers in spades. 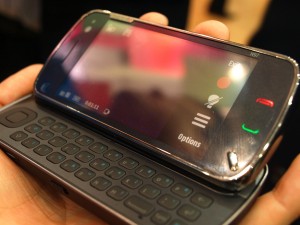 Unfortunately, Nokia’s insistence on using resistive-based touchscreens hurts the Nokia N97’s chances of blowing away the touchscreen competition. The squishy-type touchscreen was somewhat slow to respond, leaving us wondering if we had indeed pressed a particular button. On the up-side, the QWERTY keyboard was good enough to compete with the likes of QWERTY smartphone-maker HTC – and given HTC’s experience in making full-QWERTY smartphones, that’s saying a lot.

We didn’t really test out the Nokia N97’s software because of time limitations, but expect the S60 5th Edition OS to get the job done decently well. If you’ve had any experience with the Nokia 5800 XpressMusic, you’ll have a good idea of how the Nokia N97 operates on the software-front.

Check out our Nokia N97 hands-on gallery and video below!

One of my 'ninjas' let me know about this one. The folks at Appliya have developed a virtual 'Katana' app...