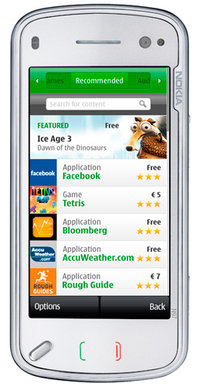 Nokia and T-Mobile issued a release today saying that they’ve agreed to promote together their respective offering for widgets, applications and other content.

There are some things I don’t quite understand. Here’s an excerpt from the press release:

The customer can browse and download widgets from both the T-Mobile widget gallery and Nokia’s Ovi Store using T-Mobile’s web’n’walk widget platform. The integrated marketplace will be available during the second half 2009 on mass market Nokia Series 40 platform based phones.

T-Mobile’s web’n’walk widget platform will be supported on Series 40 based feature phones, the highest selling devices in Europe to date. A Java based widget client makes it possible for both offerings to co-exist.

This co-operation takes the new web’n’walk widget platform into the mass market and opens up the long tail of applications and services from Nokia’s Ovi Store and T-Mobile’s widget gallery.

Now does this mean that T-Mobile customers with Nokia Series 40 phones will basically have two application stores on their handsets – one from Nokia and the other one from T-Mobile? If that’s the case, it’s kinda stupid.

On the other hand, maybe Nokia wants to integrate T-Mobile’s widget offering into its upcoming Ovi Store. That, on the other hand, could be a brilliant idea and would certainly help the Finnish giant reach other carriers as well.

Whatever the case is we’ll have to wait for the H2 2009 and see for ourselves how this works in real life. In the meantime, T-Mobile’s customers will get a chance to try out the carrier’s new web’n’walk client/app which should launch at some point in spring. Stay tuned…

Today Nokia announced two partnership agreements. The first of the two involves Qualcomm, along with whom the Finnish giant will...