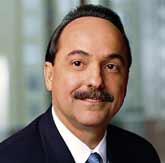 Rumors have been bouncing around for some time now that Dell may be entering the smartphone market. While Dell isn’t present at MWC this year, AT&T Mobility CEO Ralph De La Vega is, and during a panel at the event he let the following gem slip through his lips:

That’s exactly what he said.

Now, I realize that isn’t a quote from anyone at Dell, but when Ralph De La Vega says something, there must be some truth to it. One has to think now that AT&T and Dell have been working together or have at the very least been in discussions about a new smartphone from Dell. I’m sure we’ll get some reaction from Dell on this in the near future.