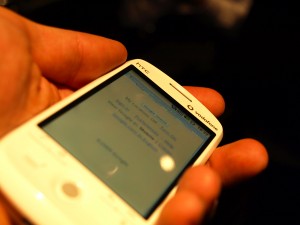 Vodafone might have stolen the world-stage yesterday with the announcement of their Android-powered HTC Magic (G2, if you will), but we couldn’t satisfy our gadget-fix with a measly press conference at Mobile World Congress. So, we set off in search of a real, live HTC Magic to put our greasy fingers on (okay, maybe more sweaty than greasy). Thankfully, HTC’s press suite at Mobile World Congress was just to place to quench our thirst for hands-on action.

The second-coming of the HTC-made Android phone is everything we expected. The HTC Magic is similar in both style and substance to its Android forebear, the T-Mobile G1. With a 528 MHz processor, 3.2-inch 320 x 480 HVGA capacitive touchscreen, GPS and Bluetooth, the HTC Magic 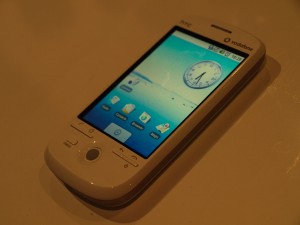 performs just as well as the G1. But, instead of a physical keyboard adding extra girth and heft to the device, the HTC Magic relies on just an on-screen virtual keyboard to handle all your text input needs.

The now-familiar “chin” on the G1 has been passed down to the Magic, abeit in a less pronounced fashion. The “menu” button has been moved, and has shrunk in size, along with the other navigation buttons, compared to the G1. Unfortunately, the smaller buttons might pose a slight problem to larger-fingered users, but nothing that can’t be overcome with a little patience and button-pressing practice. 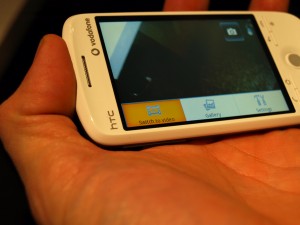 As far as in-hand feel, the HTC Magic is perfectly sized. The Magic isn’t unweildy but it could stand to shed a few ounces and a couple millimeters from its waist. The large capacitance touchscreen and precision trackball make for the kind of enjoyable user experience you’d expect from an HTC-made Android smartphone that follows in the G1’s footsteps. There’s not sliding screen to move around or jiggle, giving the Magic the kind of solid feel that only a slate-based touchscreen can offer.

And, as a bit of icing on the Android-cake, the Magic sports video recording using the 3.2-megapixel camera. The older G1 might be feeling a bit left out – like an only child having to deal with the arrival of a newborn sibling. It’s okay, G1, we’ll always love you – now get out of the way, you’re blocking our view of the G2.

Let it never be said that HTC rests on their laurels. With the HTC Touch Pro 2 and HTC Touch...