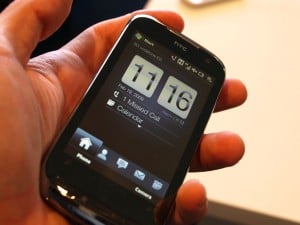 Let it never be said that HTC rests on their laurels.

With the HTC Touch Pro 2 and HTC Touch Diamond 2’s official announcement earlier this week, HTC is pushing ahead in the Windows Mobile smartphone market that they helped shape over the past several years. But, rather than push out new hardware with the same old (if you can call it that) TouchFLO 3D UI that has proved so successful in HTC’s current WinMo smartphone lineup, HTC has endowed the Touch Pro 2 and Touch Diamond 2 with a tweaked version of TouchFLO 3D that adds more features while speeding up the interface.

On this, the last day of the Mobile World Congress, HTC was good enough to give us a demonstration of the refreshed TouchFLO 3D UI. Right off the bat, we noticed that TouchFLO 3D loaded much more quickly on both the Pro 2 and Diamond 2 than we’re used to seeing on the current HTC Touch Pro and Diamond. Scrolling through TouchFLO 3D reveals a new “Stocks” tab to help you keep track of your investments. The “Mail” pane serves up email previews that make it easier for a user to decide whether or not a new email is worth reading. The new TouchFLO 3D also allows the user to remove and rearrange TouchFLO 3D tabs to their liking – HTC listened when customers complained about not being able to customize TouchFLO 3D’s tabs, and the result is a completely configurable homescreen.

As part of HTC’s new “people-centric” approach to the contacts list, you’ll find that the “People” tab now integrates all the communications from a particular contact – email, text messages and call history are all gathered in one convenient place. And, because it can be a hassle to wait for frequently-visited webpages to load, HTC is backing a new feature they call “Push Internet.” While nothing is really being “pushed” to the handset, the new TouchFLO feature will download (pre-fetch, if you will) data from websites that you specify at customizable intervals. The idea is to have all the web-site data ready and cached so that when you go to visit your favorite page, you don’t have to wait for the browser to load the page. And, as an added bonus, “Push Internet” allows for offline viewing of webpages.

Of course, video and pictures are probably worth a couple thousand times what you’re reading here. So, without further ado…