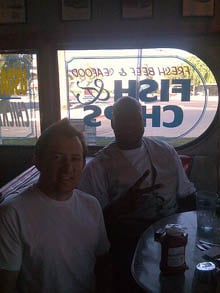 This is an awesome story. Blogger Jesse Bearden and his buddy Sean had a not-so-chance encounter with Shaquille O’Neal at a local diner the other day. The two friends were trying to decide whether THE_REAL_SHAQ was indeed the real basketball player, or just someone out there having a little fun. After having received a tweet from ‘Shaq’, they headed down to the diner where he was located to see if he was the real deal. When they arrived, there Shaq was, toting a G1 and loving it.

“I know it’s dorky man, but can I get a pic with you?” I asked, slightly intimidated.

“Of course” he said, “Pull up a seat” The behemoth slid over and patted the booth next to him. As I pulled out my phone to take a picture he snatched it out of my hand and inspected it.

He gave it the once over before handing it back and showing off his Google Phone. We talked for a bit, and snapped a photo for both Sean and me before shaking hands and returning to our table. I almost got the feeling he wanted us to hang out, but we didn’t really want to push our luck.

“Make sure you put that on your web page” he said as we walked away.

You can check out the full story right here. Thumbs up to Shaq, and thumbs up to Jesse. Great story.

While speaking at a conference earlier today, Google was busy showing off Gmail running on Android. All well and good,...