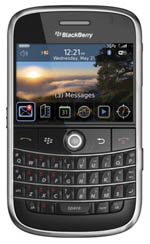 A low-end texter I could understand having some temperature problems, but the illustrious BlackBerry Bold? Why, I never…! Japanese carrier NTT DoCoMo has pulled the BlackBerry Bold off shelves due to overheating issues, after having put the smartphone on them only last week. It’s not a battery issue apparently, so we can rule out explosive fatalities on that front; rather, it’s the keyboard that’s heating up, according to 30 of the 4,000 purchasers last week. If you got your Bold anywhere else, you shouldn’t have to worry, though.

Whether this has to do with the camera-less variant or the extra 3G band crammed in there is as yet undetermined. The official announcement for the 9000 came back in September, with official timelines locked in in November. Hopefully it won’t take long for this heat problem to get sorted – it would be just plain cruel to deprive the Japanese of such a fine handset.

Some solid Canadian mobile news here. Reports have it that Bell have received their 'dummy phones' for the Palm Treo...