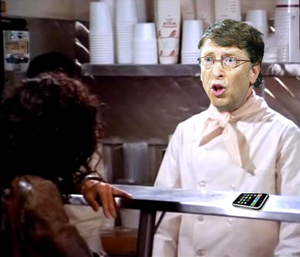 This isn’t much of a surprise, but Bill Gates doesn’t let the kiddies use an iPod on iPhone in the house, according to an interview with wife Melinda Gates. Heck, if you were Bill Gates, would you? That would be some seriously bad press if anyone found out – you can just see the headline: “Gates Family Secretly Adores Apple”. Surely they suffer no shortage of Windows Mobile devices (or XBoxes, or big piles of money to roll around in) in that house, but that doesn’t stop Mrs. Gates from eyeballing the competition.

“There are very few things that are on the banned list in our household. But iPods and iPhones are two things we don’t get for our kids. … Every now and then I look at my friends and say ‘Ooh, I wouldn’t mind having that iPhone’.”

iPhone blows away competition with 66% of all mobile web traffic!

When it comes to using the mobile web, you'll be hard-pressed to find anyone that denies the iPhone's multi-touch web...