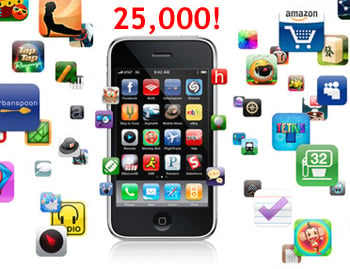 This isn’t offical, hence the question mark at the end of the title. However, according to 148Apps.com, which keeps a running count of all the iPhone app submissions, more than 25,000 applications have been submitted to the Apple AppStore since May 2008. More precisely, at the moment of this writing the total number was 26,024!

Now I wonder why Apple is quiet about this. When I visited their iPhone page today, it said “15,000 apps. And counting.” Maybe they don’t count all the “Lite” version, which will possibly dissapear once they introduce the free trial system. Now I’m speculating, without any insider knowledge. It’s just the feature many developers and users would like to see in place.

Anyway, way to go Apple! Within less than two years, more apps for the iPhone/iPod Touch were developed than for many of the well established smartphone platforms!

As a reminder, a month before we reported that AppStore reached the 20,000 app milestone.

Toshiba working on a new smartphone?

According to some documents from Global Certification Forum (GCF), Toshiba may have one more powerful phone in the pipeline. The...