Leading the charge against entrenched smartphone incumbent Nokia, both RIM and Apple have proven that consumers are a finicky bunch. Following on data that had Apple and RIM at least doubling the size of their slice of the smartphone market, at Nokia’s expense, we’re presented with new data from Gartner that confirms Apple and RIM’s mobile OS offerings are leading the charge against the Finns and their Symbian mobile OS. 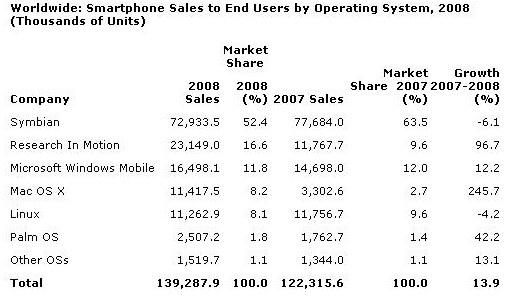 Meanwhile, Nokia saw their Symbian market share shrink 6.1% on sales of just under 73 million units. It’s clear that Nokia is still the market leader, by a fairly large margin, but there’s no doubt that the “little guys” are playing catch up as we speak.

Worldwide, smartphone sales were up 13.9% in 2008, compared with figures from 2007. It seems the global demand for smartphones has outpaced the dwindling global economy. After all, we’re always going to need cellphones.

We can only imagine Nokia’s troubles are just starting, what with Palm’s WebOS expected to take the world by storm later this year. Unfortunately, Nokia’s move to go open-source with Symbian might not be enough to fend off the advances from the likes of Apple and RIM.