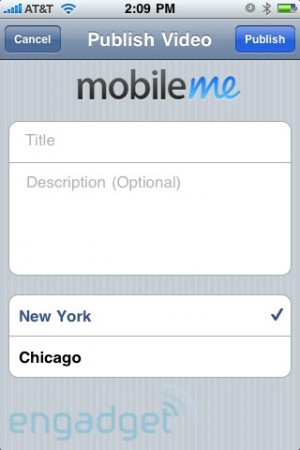 Folks have been digging up all sorts of goodies from the iPhone OS 3.0 released just two days ago, including hints of new iPhone models, podcast updates, and theft trackers. Some, like tethering, were publically acknowledged in the presentation, but one that we didn’t see was video recording, a featuring sorely lacking from the iPhone’s camera since launch. The possibility of its inclusion in 3.0 comes from this MobileMe screen that was supposed to be for sharing pictures to Apple’s web service, but the title bar clearly reads “Publish Video”. Simple typo, or a hint of things to come? Hard to say right now, since the operating system is still more for developers than end users, but c’mon – video recording wouldn’t be too much to ask for, would it?

Android-Powered Omnia HD on the Way?

Word has it that upcoming versions of the Samsung Omnia will not only be running Symbian, but Android and other...