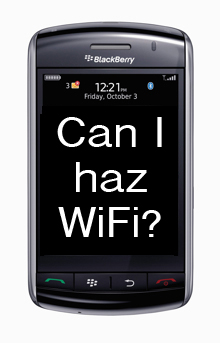 Let’s set aside the BlackBerry Storm’s SurePress shortcomings for a minute and consider its other major sticking point, the lack of WiFi support. As RIM’s first touchscreen smartphone, we’d have thought that RIM would have endowed the handset with WiFi connectivity. Alas, the first-generation Storm lacks any WiFi support.

But that may all soon change. Verizon is rumored to be readying a WiFi-equipped Storm successor for this Fall!

Word on the street has Verizon launching a WiFi savvy BlackBerry Storm 2 in September. If true, Storm hopefuls will only have to wait until the end of Summer to have their prayers for WiFi answered.

The BlackBerry Storm 2 is also rumored to hit market with more interesting features in tow. We’re putting our money on upgraded camera and other under-the-hood upgrades. Unfortunately, we don’t see the Storm 2 ditching the SurePress touchscreen – RIM has invested too much into SurePress to let it die after just a single generation. But, a few SurePress software-tweaks and a less harsh “click” would be nice to see.