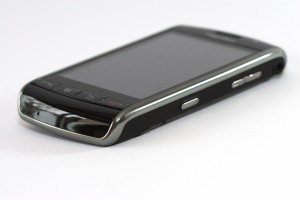 Alain Segond von Banchet, a RIM Channel Sales Manager for RIM in the Netherlands, has openly acknowledged the existence of the alleged BlackBerry Storm follow-up at the TeleVisie 2009 conference. On top of providing a firmish launch date of late ’09/early ’10 on TPN, von Banchet also hints at a new way of inputting text. While it’s unlikely that SurePress will be booted altogether, maybe we’ll something as drastic as a slider variant with a physical keyboard (RIM has a patent for it, and analysts have already called it), or maybe a smaller change like typing that doesn’t require a full click, and operates on light touch alone like traditional touchscreens. Word has it a new screen style called TruePress will make typing a helluva lot easier.

Aside from that, Wi-Fi will likely be in – one of the biggest holes in the old BlackBerry Storm. The release date conflicts a bit with earlier reports of a September launch, but Verizon and TPN likely have different release schedules.