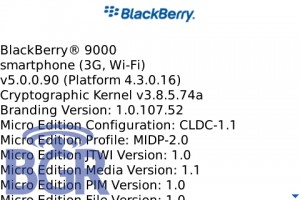 BlackBerry operating system 5.0 has found its way onto the Bold, packing little more than a facelift. Similar to what we’ve heard regarding the BlackBerry 9630 “Niagara” interface, everything is changed to look a little more like the BlackBerry Storm (such as how you edit ringtone profiles) . Google Gears support announced at the BlackBerry Developer Conference is in, as is remote file access promised by BlackBerry Enterprise Server 5.0. Memory usage information is broken down a little more sanely, with a tiny pie chart and collapsible menus. Overall, it’s the moderate, evolutionary upgrade you would expect from RIM: nothing crazy, but a few new treats to keep things moving forward.  It sounds like there are still a few bugs to work out, but it wouldn’t be crazy to expect OS 5.0 for the big BlackBerry show, WES, in May.

Apparently, Palm Pre training is beginning for Sprint sales reps this month, in line with the latest rumours of a...