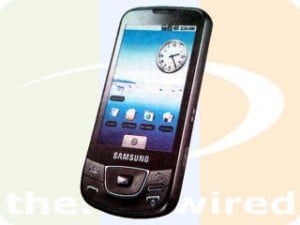 As the year progresses, we’re getting more information about various manufacturers’ Android plans. The latest rumors point to Samsung making the jump to the Google-backed Android OS later this year with their Android-powered Samsung I7500 on Germany’s O2 network.

Samsung is keeping mum on the finer details, but word has it that the 11.9mm-thick Samsung I7500 will sport a 3.2-inch HVGA (Half VGA) capacitance OLED touchscreen, 5-megapixel camera (with LED flash), GPS, WiFi, Bluetooth, 8GB of internal storage and a microSD card slot – all powered by a Qualcomm MSM7200A CPU clocked at 528 MHz, running Android OS 1.5.