HTC pioneered the smartphone one-two punch with their HTC Touch Diamond slate and HTC Touch Pro QWERTY-slider. The formula worked – HTC offered those without a need for a QWERTY keyboard a slimmer touchscreen smartphone (Touch Diamond), essentially adding a slide-out QWERTY keyboard for those with a need for hard keys (Touch Pro). And, now that the HTC Touch Pro2 and Touch Diamond2 are starting to hit market, Samsung is rumored to be crafting a QWERTY-toting complement to their Samsung Omnia i8910 (HD) – the Samsung Omnia Pro. 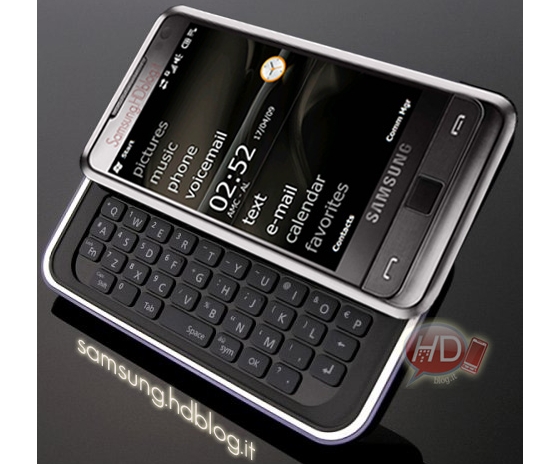 This is a mockup. This is not the real Omnia Pro.

Word on the street has Samsung readying their new Samsung Omnia Pro for launch in July. The Omnia Pro is reportedly going to feature a 3.5-inch WVGA (800 x 480) touchscreen display, 5-megapixel camera (with flash and auto-focus) and a slide-out QWERTY keyboard, a la the HTC Touch Pro and Touch Pro2. And, given the “Pro” branding, it would make sense to see the Omnia Pro rocking features already available in the Omnia – GPS, WiFi and 3G data connectivity. We’re expecting the Samsung Omnia HD to ship with Windows Mobile 6.1 Professional upon launch, with a Windows Mobile 6.5 Professional upgrade coming down the pipeline later in the year.

Look for the Samsung Omnia Pro to drop sometime in July with a €500 ($662) price tag. Hey, you gotta pay to play… unless you can get it for free on contract.

It's not everyday you hear of a best-selling novel being written almost entirely on a QWERTY-toting Windows Mobile smartphone. While...