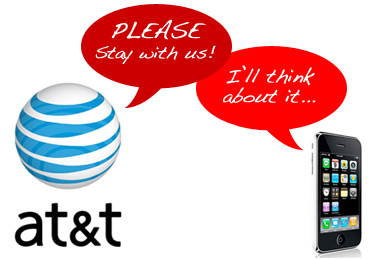 During their quarterly report, Verizon’s CEO had mentioned that they had a shot at an LTE iPhone, and now USAToday is giving the rumour mill a few additional spins. According to “people familiar with the situation”, Apple CEO Steve Jobs had been talking with Verizon about the possibility of an iPhone arrangement before he took off on medical leave, and even since then, talks have continued. The status of AT&T’s exclusivity on the iPhone is still up in the air, especially considering the length of their deal was never made public (rumoured to be 2010), but word is AT&T is fighting to keep a hold on their hottest device. As much fun as AT&T has had with the iPhone, Verizon is now the biggest carrier on the block with Alltel under their wing, and Apple no doubt once a peice of that pie. Back at the original iPhone launch, choosing between CDMA and GSM on a global scale was a pretty easy decision to make, but with a common ground in 4G on the way (presuming WiMAX sticks to netbook and UMD connectivity), it’s a decision handset manufacturers won’t have to make anymore.