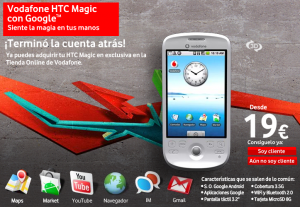 The earliest we thought we’d see the HTC Magic on market was May 5th on Vodafone UK. Turns out, the Android-powered HTC Magic is ushering in the second-generation of HTC Android devices today in Spain! That means those lucky Spaniards will be playing with the slate-based Magic more than a week before the rest of the Android-loving world.

Vodafone Spain apparently kicked-off sales of the HTC Magic at 1700 hours, local time. The carrier had even posted a countdown timer to make those last few hours as excruciating as possible. There’s nothing like watching the clock countdown those last couple hours in anticipation of a handset launch.

Excuse us, we need to book the next flight to Spain…

Before you go putting all your faith into this here rumor-basket, just know that this alleged Sprint documentation isn't in...