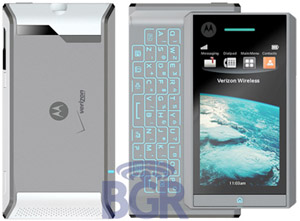 Motorola’s looking to get back at least a portion of the mobile market that it has managed to let slip from its grip over the past few years. If they don’t succeed, Motorola’s mobile phone business may soon be a distant memory. With a sleekly-designed Android smartphone, Motorola may have a shot at returning to profitability in the near future. Boy Genius has come through again with leaked shots of Motorola’s allegedly still-developing Motorola Calgary Android smartphone, and it’s one sharp looking smartphone.

The Motorola Calgary will likely sport a capacitance touchscreen to complement what looks like a laser-etched QWERTY keyboard. The Calgary’s slide-out keyboard bears a familiar resemblance to the Motorola Sidekick Slide that T-Mobile recently put out to pasture, following lackluster sales – only the Calgary’s design aesthetic looks decidedly more high-end and refined. And, it looks like the Moto Calgary is headed to Big Red – the leaked Calgary mock-ups point to Verizon Wireless as the carrier of choice for Motorola’s Android-powered Calgary.

We don’t have much more to go on at the moment, but BGR mentions that the promising Motorola Flash and Inferno will never see the light of day. That’s sad news to be sure. But, there’s apparently some sort of all-glass Motorola “Rolex” handset currently in-development in a Motorola R&D lab somewhere in the US. Motorola, please get it right this time. We really want to see you regain some of your lost market pride.

Even if Verizon doesn't win Apple's affections for their upcoming devices, word has it Microsoft is attempting to woo America's...