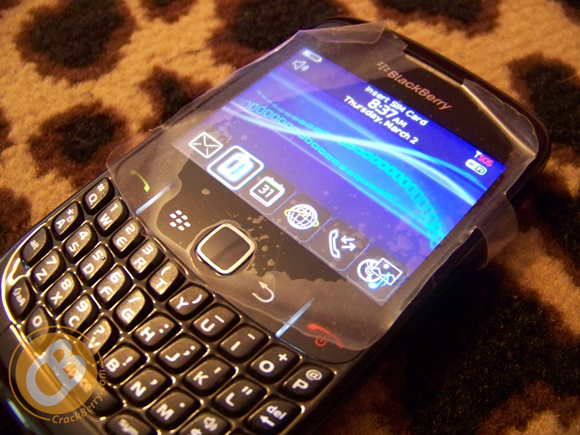 The BlackBerry code-named Gemini was first seen a few months ago and has since had a bit of an overhaul – namely with an optical trackball. If we’re to believe the old 8325 is now the 8520, there’s a possibility of n-class Wi-Fi, 320×240 screen, a 2 megapixel camera without flash, quad-band GSM (sorry, no 3G), and will launch with OS 5.0. The specs don’t really impress, but the Gemini certainly goes to town on style. A rubberized perimeter, new music controls on the top of the device, what looks like a metal battery door and a screen flush with soft keys makes me think this Curve would feel great in the hand.

It seems like the new –20 model number will be reserved for BlackBerrys that eschew the trackball in favour of the new optical input method. While on the one hand, it’s a little weird thinking of a BlackBerry without a trackball at this point, it’s an interesting experiment and should make the touch-optimized OS of the Storm easy to bring over. Overall, it’s a nice look for the Curve, and a reasonably big step for RIM – let’s just see how long the trackballs last before optical takes over everything.

With the release of the latest iPhone OS 3.0 beta 4, we're getting confirmation that Apple will be building out...