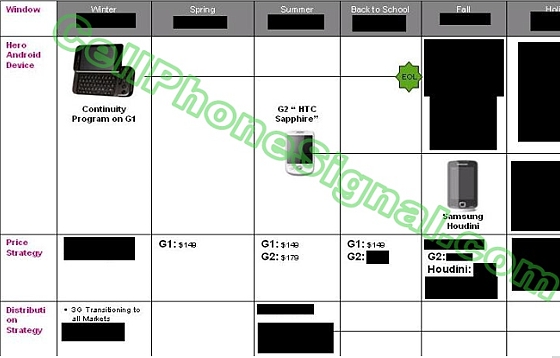 It’s going to be a great summer for T-Mobile and Android. According to a new document leaked by the folks over at CellPhoneSignal, it looks like we’re in for a lot of Android goodness. The original G1 device will take an official price drop down to $149, and will hit the end of its run with an ‘End of Life’ date at the end of ‘back to school’ season. The new G2, er, Sapphire, er… um… I mean MyTouch 3G will enter the frey at $179. Also worth noting is the Samsung ‘Houdini’ slated to hit the network this fall. Not much is known about the Houdini at the moment, other than the fact that it’s an Android-powered device with full touchscreen display. It’s going to be a solid summer and fall for Android users. Finally, more devices are coming.

Note: Must be some big news coming from T-Mobile on the Android front… Notice all of the blacked-out areas in the leaked document?… Hmmmmmm 🙂

T-Mobile Dash Getting Much Needed Boost to 3G

Remember that T-Mobile inventory shot that revealed the HTC 'MyTouch 3G'? Well, our buddy David over at TMoNews clearly has...