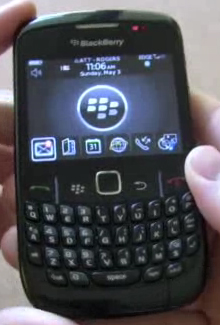 The BlackBerry 8520 Curve (previously code-named Gemini) now has a tentative carrier and release date: T-Mobile, Q4. For those who didn’t catch the leak earlier this week, the BlackBerry 8520 features a lot of style changes to the old Curve series, as well as an interesting new input mechanism that will likely replace the trackballs we’ve all been using since the Pearl launched two years ago. The central touchpad will likely feel a lot like an optical input, like that on the Samsung Saga, but despite the fanciness, the 8520 will apparently be targeted to those on a budget and launched in emerging markets. We’ll have to wait on a pricetag to see just how “budget” they’re thinking. With no flash on the 2 megapixel camera, and otherwise ho-hum specs, it shouldn’t be hard to keep the cost down.

RIM co-CEO Mike Lazaridis coyly hinted at what was called the BlackBerry Wireless Presentation solution in his day 1 keynote...