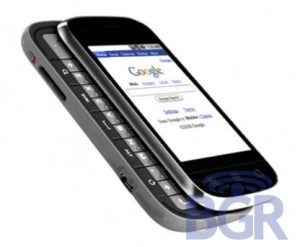 We’d previously heard that T-Mobile was getting ready to launch a revised G1 in the coming months. The T-Mobile G1 v2 “Bigfoot,” as it’s called, is apparently a re-tooled version of the first-generation T-Mobile G1 Android phone – complete with slide-out QWERTY keyboard. Today, we have a clear picture of what the upcoming T-Mobile G1 v2 will look like, and it’s a sharp looker.

The first thing to notice on the T-Mobile G1 v2 is that the conspicuous “chin” is now gone. The G1’s pronounced chin has gotten a lot of criticism over the past several months – mostly because it gets in the way of typing on the landscape QWERTY keyboard. The chin and the “unique” slider mechanism on the G1 were the biggest points of contention on those devices. But, with the G1 v2, we’re looking forward to a new Android device with a more traditional slide-out QWERTY setup, more ergonomic keyboard keys and a sleeker overall design.

The G1 v2 makes up for all the G1’s cosmetic-shortcomings. If it sports a 5-megapixel camera, like its younger brother, the T-Mobile myTouch/Magic/G2, the G1 v2 may be the more appealing T-Mobile Android handset. In fact, the sleeker lines on this G1 v2 reminds us of HTC’s range-topping HTC Touch Pro2!

While we still don't know precisely what T-Mobile will be calling their second-generation Android phone, word on the street is...