Venezuela’s president Hugo Chavez has just done what no other cellphone company in the world would dare do. Chavez has launched the first ever “penis” phone. Wait, what? 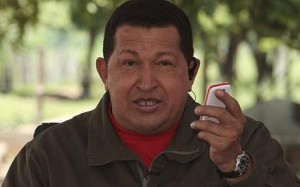 Want to touch my Penis Phone?

In an unprecedented product launch, Hugo Chavez became the first sitting national leader to launch a cellphone. Hugo took the time during his weekly TV show, “Hello President,” to unveil to the world the new “Vergatorio” cellphone. He proclaimed to the world that “This telephone will be the biggest seller not only in Venezuela but the world.” Chavez went on to add that “whoever doesn’t have a Vergatario is nothing.” For those not too versed in Venezuelan slang, the name “vergatorio” is derived from the local slang for “penis.” You can imagine the look on Chavez’s PR team when he uttered those fateful words.

Chavez started down the road to his historic “penis” cellphone launch when he nationalized the cellphone manufacturer that made the Vergatorio. The President-turned-cellphone-pitchman wanted to make a cellphone that was “light, beautiful, good and cheap.” The end result is the unfortunately named Vergatorio.

Horribly inappropriate model name notwithstanding, Chavez’s vision for the Vergatorio is noble. The Venezuelan President wanted to put “science and technology” to work for “the service of the people not the elites.” But, we have a feeling that Hugo’s pitch isn’t going to win over too many hearts and minds. People just don’t like being told they’re nothing without a “penis” phone…

The internet radio service that started it all is apparently enjoying some decent success with their iPhone application. Pandora's web-based...