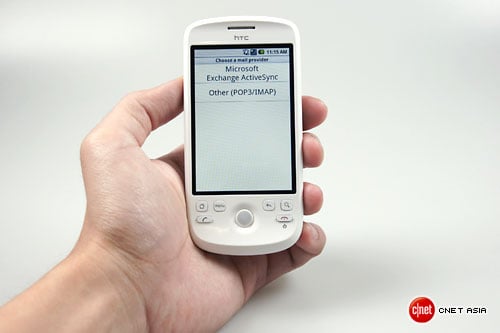 Apparently the HTC Magic, recently launched in Singapore, is jam-packed with Exchange e-maily goodness, making it potentially viable in the hardbitten world of enterprise mobility. Push e-mail, contact and calendar sync are huge features, but it looks like HTC had even more up their sleeve. Our buddy Michael Oryl from Mobile Burn did some digging on the matter, and HTC rep Eric Lin confirmed the Exchange, among other tweaks.

The Vodafone version of Magic has “with Google” on the back, like the G1. This simple phrase indicates that the phone has a pure Google experience – no customizations have been made to the software. The Magic being sold in most of Asia is not a Google experience phone so we have started to put some of the HTC special sauce into Android. That Magic has Exchange support, a much more responsive and full featured camera application, a custom dialer application with smart dial and additional widgets as well.

As much as I love Google, the real magic of Android is what manufacturers will do with the operating system – the point of open source is the ability to tinker and change, after all, and it’s really good to see that even HTC, who has been Android’s poster-boy since launch, is even getting in on the action. The real question is, when do we get to see this non-Googlfied Magic in North America?

From all I've read and heard thus far, most folks in the US are still eagerly awaiting the Cupcake 1.5...