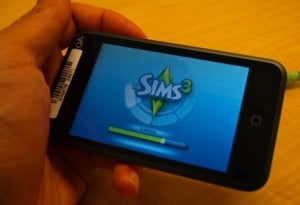 EA Mobile’s stable of iPhone games is already impressive, but it’s about to get even better. The mobile arm of famed game developer EA is putting the finishing touches on their latest in iPhone gaming – The Sims 3 for iPhone –  and we’ve got the first-look scoop for all our readers!

These are the same guys behind iPhone-tastic gaming titles like Spore Origins, Tiger Woods PGA Tour and Need for Speed Undercover, so you know their “next big thing” is going to be, well, big. And, after spending some time with the EA Mobile team and their Sims 3 iPhone game, we’re convinced they have a hit on their hands. Keep reading for our first-look preview. 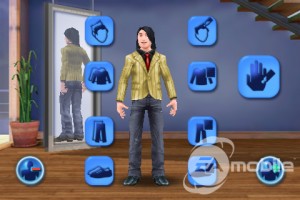 In The Sims 3, iPhone users can guide their custom “Sim” character through a virtual world as they mingle with other Sims, go to work and even decorate their house. From the “Romantic” trait or “kleptomaniac” trait to the “evil” trait, the player can choose from a vast amount of personalities that can combine in millions of unique Sims, which should make for some good “replay-ability.” The goal of the game is to simply to keep your Sim alive (by eating food and getting enough sleep) and achieving goals (like getting a job or buying a fishing kit) – a simple enough objective that makes for hours of addictive fun. If you’re familiar with The Sims franchise, you know what we’re talking about. 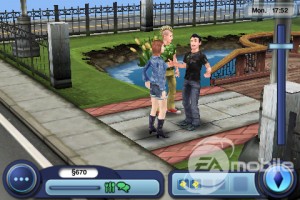 We were surprised by the game’s playability and the smooth 3D graphics (using an iPod Touch for demo purposes). All menus and navigation controls are incredibly intuitive – you flip through menus and scroll down lists with a flick of the finger. And, without being briefed on in-game controls, we managed to find our way through the Sims’ world with little trouble. The Sims 3’s iPhone-optimized UI is a testament to EA Mobile’s devotion to iPhone gaming.

The Sims 3 takes full advantage of the iPhone’s 3D graphics capabilities. The entire 3D world pans, tilts and rotates around your Sim character smoothly, without any noticeable lag. In fact, we were repeatedly impressed by the iPhone’s ability to smoothly render the 3D world with ease. 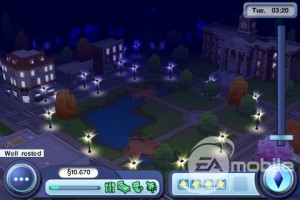 You pan around the game with a single finger. Dragging two fingers vertically along the touchscreen tilts the 3D view and rotating two fingers (as if you were twisting a volume-control knob) rotates the map. All the while, the game dims and raises the lighting to match the time of day in Sim-land – a nice touch to be sure.

The Sims 3 for iPhone is expected to bring the Sims franchise to the iPhone on June 2, but the version of The Sims 3 that we played with seemed just about ready for prime-time. EA Mobile said that these final weeks will be spent tweaking some minor gameplay details and adjusting the in-game soundtrack, which sounds just about right to us.