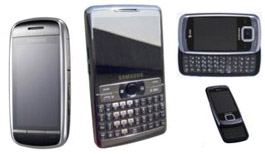 And we’re continuing to show you what’s in AT&T’s pipeline thanks to the information we got from Engadget. Today we’re presenting you with three Samsung devices U.S. carrier is preparing to launch. Let’s quickly go through their specs, shall we?

Unfortunately, Samsung’s Android-powered i7500 and S60-based OmniaHD are not on the list, but still it looks like AT&T has picked wisely. We’ll see…

The BlackBerry 9630 still hasn't seen an official announcement, despite the full video rundown and photo shoot, but to complete...