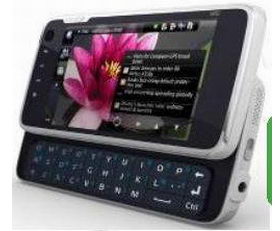 Now that the Maemo 5 SDK is out in beta, we’re expecting to see Nokia’s next Internet tablet. That said, I’m glad to report that rumors have started to surface saying that the upcoming device will be called N900 Rover. According to MobileCrunch, Nokia will release the N900 in summer and the first carrier to pick it up will be T-Mobile.

The report goes on, adding that the Deutsche Telekom-owned operator will start offering the tablet in July and bring it to the U.S. somewhere in August or September. Asia and the Middle East will also see the N900 released during the summer, while Europe will have to wait for October.

Specs wise, the N900 will join Nokia’s phone family thanks to the built-in cell phone radio (my two cents – I would love to have a version of the device without that part), which will support 3G/HSDPA connectivity. Moreover, the screen will shrink from 4.1 to 3.5 inches (capacitive?), but will keep the same WVGA (800×480 pixels) resolution. Other features of the device include GPS, WiFi, accelerometer, 5 megapixel camera with auto-focus and dual-LED flash (very cool), OMAP 3430 CPU at 500 or 600 MHz, 32GB of storage space that is expandable with microSDHC cards, 1320 mAh battery. Size wise, from what we’re hearing the N900 will be kinda bulky device measuring 111×59.7×18.2 mm and weighing full 180 grams. Still, considering all the goodies found inside, that doesn’t sound like a problem, quite the contrary.

Final word – I guess this goes in line with my earlier article on what I would like to see on the next Nokia’s Internet tablet, though an even faster CPU like 1GHz Snapdragon and higher res screen of 1024×600 pixels would be appreciated even more. Furthermore, this seems as part of the rumored strategy that Nokia will make computer, laptops or… better tablets! 🙂

[Via: Unwired View, image from CellPassion not necessarily presents the N900]

And we're continuing to show you what's in AT&T's pipeline thanks to the information we got from Engadget. Today we're...