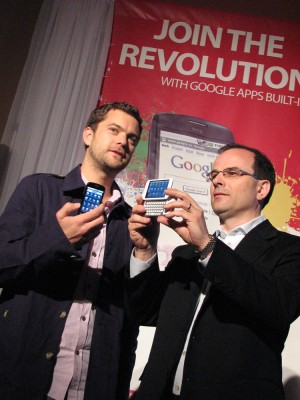 Okay, okay, roll in those tongues ladies, this is about Rogers’ first Android-toting smartphones, the HTC Magic and Dream, not your beloved Joshua Jackson of Dawson’s Creek fame, however dreamy and/or magical he may be. As mentioned, Rogers has announced the first Android devices in Canada for $149.99 on three-year contract, and are offering a promotional $30 6 GB monthly data plan. You can pick ’em up in stores now.

One of the biggest questions that lingered after their launch event in Toronto was “why did it take so long for Android to get to Canada?” I’d like to think that Rogers was taking the high road and waiting until Exchange support was available, but it seems more likely that they didn’t hop on board last fall like T-Mobile US did because the iPhone 3G was still fresh out of the gate and they didn’t want to cannibalize any sales; even now, based on some of the ads they showed us, it’s clear Rogers is pushing the slider Dream more than the newer, more impressive, full-touchscreen Magic.

Hit the jump for some first impressions of the HTC Magic and HTC Dream from Rogers, and a bunch of pictures both of the handsets and Joshua Jackson, if you’re into that kind of thing.

The Magic’s form factor was immediately impressive – slim, sleek, and functional. The 3.2″ HVGA touchscreen is extremely responsive and smooth, especially in the browser. I hadn’t spent much time with Android, but the ability to scan a page in fullscreen with the fisheye lens then release your finger to zoom in on the area is absolutely great. My primary complaint about mobile web browsing on touchscreens has always been nailing links that are tucked away in clusters, but that’s where the trackball really shines – you can scroll through a number of links quickly and chose one precisely without any trouble using the trackball.

Having spent most of my time with the BlackBerry, and previously unimpressed with my iPod Touch’s keypad, I was tentative about the Magic’s. Luckily, the keys in landscape were large, haptic feedback helpful, and apparently the OS learns your finger placement and adjusts accordingly. I remember hearing that some Windows Mobile phones were picky about where you could hit a key, so a flexible system that adapts to the user is a good way to get around that.

All-in-all, the HTC Magic is smexy (especially the 5 megapixel camera), and I am thoroughly bummed that it’ll take a couple of weeks before a review unit is available. The only downside I can imagine is the combined charge/sync/music ExtUSB port, but even that is forgiveable by many. Keep an eye in the near future for a full review. Hopefully the Market will have more than the 3,500 initial apps after it has some time to mature.

The HTC Dream is only different from T-Mobile’s G1 by way of its casing, so if you’re looking for the full scoop on the Dream, it probably makes sense to check out Will’s full-blown review of the G1 – just pretend it has the latest cupcakey goodness and Exchange support.

Early June is really shaping up to be an exciting week in the mobile world. Just a couple days before...