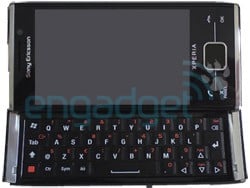 We had heard an off-hand mention of the Sony Ericsson X2 from Skyhook, now we’re getting some leaked eye candy of what is apparently code-named “Vulcan”. The earlier mention said the next Xperia would also be running Windows Mobile, but aside from that, we don’t know much about this sucker. It definitely looks like a part of the family, but it would be nice to get a closer look before commenting further.

It's no news that Bell (or Verizon and Telus, for that matter) is getting the BlackBerry 9630 Tour, the first...