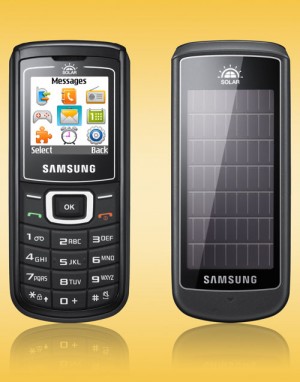 Samsung’s most prominent move into solar-power cell phones to date has been Blue Earth, but it looks like they’ve decided to ship another handset first: the E1107 Guru. Samsung India will be selling the E1107 for Rs 2799, primarily targeting rural areas with spotty electricity service.  Five to ten minutes of talk time can be squeezed out of an hour’s worth of sunlight, maxing out after 40 hours of sunbathing. Solar panel aside, there’s not much to look at…FM radio, MP3 ringtones, 1.52″ display, dual-band GSM, but all you really need is something that makes calls. Europe, Asia, and Latin America should be picking this one up shortly as well. Samsung’s touting the Guru as “the world’s first solar phone”, but that’s total bollocks, frankly – ZTE claims that prize and KDDI takes the runner-up spot. Not that we’re going to complain about an ecologically-friendly phone for emerging markets that have trouble getting with the times, but slimy marketing pushes my buttons.

Nokia N86 On The Way to Stores

Commence your rejoicing, Nokia's 8 megapixel upgrade to their popular N85 model is now shipping! The N86 was announced at...