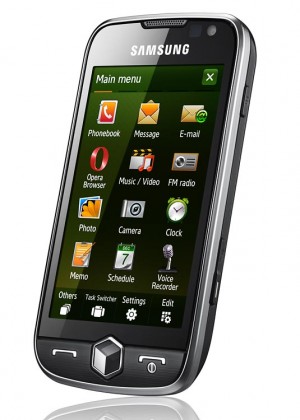 The Omnia I8000 might look a lot like the S8000 “Samsung Jet” that was also announced today, but the Omnia II I8000 is an actual smartphone, unlike the wannabe S8000. The all-new Samsung Omnia II leads Samsung’s charge towards touchscreen smartphone greatness with all kinds of high-end smartphone tech. The Windows Mobile 6.1 Professional-powered Omnia II features wireless connectivity on all fronts – WiFi, Bluetooth 2.0, 3G data connectivity and some integrated GPS hardware thrown in for good measure. The 5.0-megapixel camera sports auto-focus, dual-LED flash and records video at a near-HD 480p resolution. And, with a 3.7-inch AMOLED touchscreen throwing out 480 x 800 pixels at WVGA resolution, Samsung made sure their beast of smartphone also has a pretty face.

Expect to see the Samsung Omnia II hitting Verizon Wireless’s network sometime in the near future. Pricing and availability net yet available.

The fourth and final phone announced by Samsung today is the Omnia Lite (9B7300). So far, they're only telling us...