The Sony Ericsson XPERIA X2 hasn’t even been officially outed by Sony Ericsson, yet we already know that the XPERIA successor will be one-upping the X1 with upgraded (faster, better, stronger) specs. The X2 rocks a faster processor, an 8.1-megapixel camera (with auto-focus and 30fps video recording), the new Windows Mobile 6.5 OS, a refreshed Panel UI and that sweet 3.5-inch AMOLED WVGA touchscreen. Suffice it to say that Sony Ericsson is making good on their promise to bring the best of the best to the XPERIA flagship lineup. 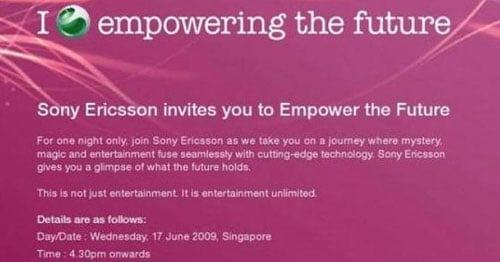 This is the invite to the event.

And, it looks like the Swedish-Japanese pair is getting ready to officially unveil the XPERIA X2 at some sort of press event in Singapore. The leaked invitation, set for June 17, seems to center around Sony Ericsson’s entertainment services, but also mentions “cutting edge technology.” For the uninitiated, the Sony Ericsson XPERIA lineup of smartphone is supposed to offer the most high-end, cutting-edge features of any Sony Ericssson handset. We wouldn’t be surprised to see SE going public with the XPERIA X2 in Singapore in a couple days.

Or not. That’s how rumors go.

We had heard previous confirmation that the upcoming BlackBerry 8520 Gemini would find its way to T-Mobile, and to further...