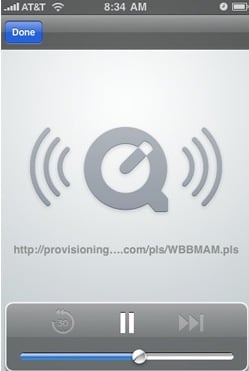 Apple’s push background notification system, which has already gone live for early iPhone 3.0 OS adopters, is something of a compromise between true multi-tasking and power consumption. Or, at least that’s what Apple will have you believe. Thankfully, Apple hasn’t completely dismissed the idea of allowing proceses to run in the background. The iPhone OS 3.0 will apparently allow streaming internet audio will continue in the background – much like the iPhone iPod application (some native iPhone apps have always been allowed to persist in the background).

Apple’s soon-to-be-released iPhone OS 3.0 (which is widely available already) does HTTP streaming video and audio, that much we knew. What we didn’t know was that iPhone 3.0 OS allow streaming HTTP audio to run in the background, essentially allowing you to multi-task the Safari browser.

As Matt Raskin points out, it’s as simple as starting an internet audio stream (try Tune.mobi) and hitting the home button (on an iPhone OS 3.0-equipped iPhone). You’ll be taken to the iPhone homescreen with the audio running in the background. Unfortunately, you’ll have to go back to the Safari browser to stop the audio.

True multi-tasking would be nice, but we’ll take whatever we can get!

Props to Matt for the find!

When people in America started complaining about the price of the iPhone 3G S and how existing customers would have...