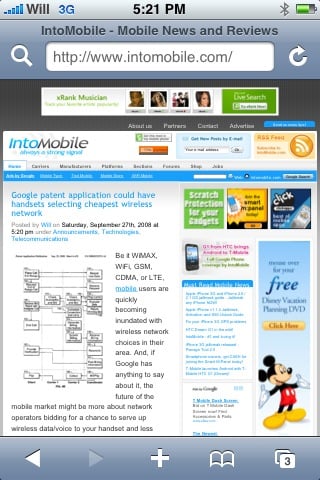 The study also finds that half of all iPhone and iPod Touch customers surf the mobile web more than they read printed newspapers, which isn’t all that surprising but still a little sad. Interestingly, we’re told that iPhone owners are generally older and financially better-off than their iPod Touch counterparts.

The mere fact that almost half of all Mobile Safari users are likely to spend more web-browsing time on their handheld device than a full-fledged computer speaks volumes about the mobile web browser’s usability and user experience. Opera Mini and Skyfire are also amazing web browsers, but when it comes to ease-of-surfing, the iPhone is apparently hard to beat – even with a desktop web browser on hand!

The survey was conducted by comScore and AdMob in the first half of 2009. The survey queried 3,848 iPod Touch owners and 3,454 iPhone owners about their daily web browsing habits.

SAN MATEO, Calif.–(BUSINESS WIRE)–AdMob, the world’s largest and fastest growing mobile advertising platform, today released new research on the demographics and behavioral characteristics of iPhone and iPod touch users in the US. This research determined that while there are many similarities between users of the two devices, key differences in the demographic makeup of each group exist in areas such as age and household income. The research was conducted by comScore on AdMob’s iPhone network of mobile Web sites and applications, making it representative of AdMob but not necessarily of the mobile population overall.

“This research highlights how important it is for marketers to understand the mobile landscape and the characteristics of the users of a particular platform or mobile device,” said Loftlon Worth, vice president, comScore. “Putting a little extra effort into the planning process can help a mobile campaign be significantly more successful.”

The research also found that 5 in 10 consumers on both iPhone and iPod touch devices use the mobile Web more frequently than they read printed newspapers. More than 40 percent reported using the Internet on their mobile device more often than using the Internet from their computers or listening to the radio.

Highlights from this new research include:

comScore and AdMob conducted this primary research into the demographics and behavioral characteristics of iPhone and iPod touch users in the first half of 2009. Participants were visitors to domains within the AdMob iPhone network who were shown survey invitation banners rather than banner ads. Those who clicked through the survey banner were presented with the mobile survey. The total sample size of iPod touch participants is 3,848, while the total number of participants in the iPhone sample is 3,454. All results were tested for statistically significant differences at the 95 percent confidence level.

AdMob is the world’s largest mobile advertising platform, serving more than 6.2 billion mobile banner and text ads per month across a wide range of leading mobile Web sites and applications. AdMob helps advertisers connect with a relevant audience of consumers on mobile devices and gives publishers the ability to effectively monetize their mobile traffic. Incorporated in April 2006, AdMob provides the tools, data, and business models fueling the explosive growth of mobile media in more than 160 countries and territories worldwide.

AdMob has been named one of the most innovative companies in advertising and marketing in 2009 by Fast Company magazine, a 2008 Technology Pioneer by the World Economic Forum, and one of Wired.com’s 2008 Companies to Watch. AdMob works with thousands of advertisers and publishers, including Adidas, CBS News, Comedy Central, Gap, Lonely Planet, MovieTickets.com, MySpace, P&G, Tapjoy, and Universal Pictures. To learn more about AdMob, visit www.admob.com.

It was only a matter of time before the global leader in WiFi hotspot service embraced the little green robot....