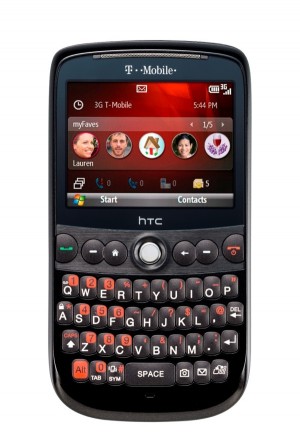 The T-Mobile Dash 3G brings the HTC Snap’s Windows Mobile 6.1 Standard OS, QWERTY keyboard and handy trackball to T-Mobile USA’s 1700Mhz 3G network with style. The slim Dash 3G’s speedy 3G data connection, WiFi (b/g), and GPS hardware make for one capable WinMo smartphone that holds it own on looks but won’t break your wallet. As for the fate of HTC’s “Inner Circle” email management feature? The rightmost key in the bottom row doesn’t look like the Inner Circle icon (it should look like this). We’re working on finding out for sure. And, that’s because it isn’t the Inner Circle key. We have confirmation that the T-Mobile Dash 3G replaces the Inner Circle key with a dedicated myFaves key. [Updated]

Still, the  And, the Dash 3G enjoys the distinction of being T-Mobile’s first 3G-capable WinMo smartphone in the US.

The T-Mobile Dash 3G, designed by HTC and powered by Microsoft’s Windows Mobile® 6.1, is available in a glossy-black finish with red accents, features a full-QWERTY keyboard, easy-to-use trackball and vibrant display. This latest version of the T-Mobile Dash delivers easy ways to stay connected and organized with voice calling, messaging, support for personal and business e-mail, GPS for location-based services, and synchronization with Microsoft Outlook®. Whether staying organized while traveling or simply staying connected with friends and family, the T-Mobile Dash 3G provides access to the life tools customers need in a small, sleek package.

“HTC is designing products like the T-Mobile Dash 3G to appeal to the ever-growing number of customers who are using the empowering features of smartphones to benefit their busy lives,” said Jason Mackenzie, vice president, HTC America. “HTC is pleased to continue its long history of working closely with T-Mobile as we today introduce the next generation of the popular T-Mobile Dash.”

According to new research by Yankee Group, 41 percent of consumers are likely to choose a smartphone as their next mobile device.* As consumer demand for feature-rich phones increases, T-Mobile is responding with an expanding lineup of 3G-capable smartphones including the new T-Mobile Dash 3G.

The new T-Mobile Dash 3G is anticipated to be available nationwide in July at T-Mobile retail stores, select authorized dealers, and online athttp://www.T-Mobile.com.