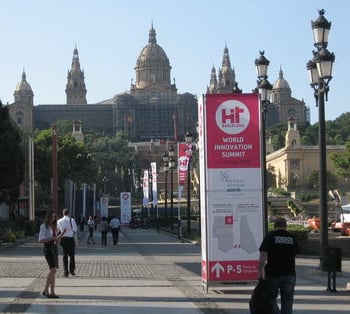 Well folks, here I am at the HiT Barcelona – World Innovation Summit event at Fira de Barcelona. The fact that it’s the same place that hosts Mobile World Congress doesn’t mean it’s the same kind of event. Quite the contrary, the accent here is on the conference program rather than on exhibition floor. Moreover, unlike MWC which occupied 100% of Fira’s capacity, the whole HiT conference is in a single Hall (5) and there’s no MWC-like rush in the air. As far as I’ve understood, it’s the first year they’re making HiT Barcelona, so I gotta give them some break. It’s still a nice idea to boost innovation, especially in the times of the global recession. I’ve no doubts it will grow in the coming years.

Since the whole conference is in the single Hall, the exhibition floor is quite small and there are only few really interesting mobile-related companies. In that sense I’ll try to cover every company I found interesting and their offerings in my today’s posts. If I catch some press release from the event, that will also find its place on IntoMobile.

I’ll end with a note that it’s good to be back in Barcelona. Love it! 🙂