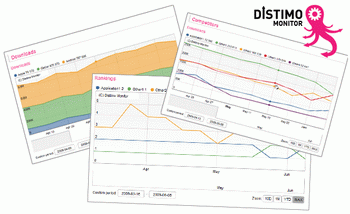 From all the startups I’ve seen, Distimo is probably the one that will most likely succeed. They provide developers with free tools for analyzing their mobile applications’ performance across application stores. All major app stores are supported, allowing developers to see how their work performs across platforms and stores. You could think of it as a Google Analytics for mobile applications.

Using Distimo developers can not only see their numbers (number of downloads and revenue generated), but also how their competitors stack. All this is done through a web environment, where they present numbers and charts.

The trick is in collecting generally available data from the app stores and combining it with the data developers get from app stores to create a usable report.

Finally, when they have enough developers on board — and they’ll certainly have as they offer valuable service for free — all that data is compiled in a report big companies want. As a matter of fact, they already sold one such report!