This is IntoMobile, so why on Earth am I writing about LG televisions? Today’s wireless infrastructure was created to support people texting, calling, and more recently: data traffic. Partially due to the iPhone, partially due to people wanting to browse the internet regardless of where they are by plugging a USB dongle into the side of their notebook, the amount of data people are using today is enough to make networks slow and unresponsive. What do you think is going to happen in the future when every little gadget in your home is going to want access to the network? 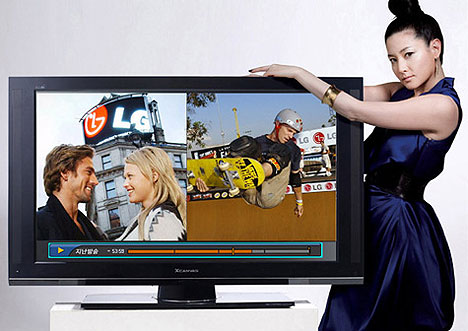 LG announced today that they’re going to license the ARM11 MPCore and Mali-200 and Mali-400 graphics processor cores and shove them into their next generation televisions.

“With Web 2.0 requirements moving into a connected and high-definition home, LG Electronics has selected the ARM architecture to guarantee longevity for our own technology,” – Seung-Jong Choi, Research Fellow of Digital TV Lab, LG Electronics

We’re not talking about walking into a store, buying an HDTV, and then purchasing a separate set top box that adds games, a browser, or any other other added feature. We’re talking about walking into a store, buying a television, turning it on and then having it asking you to setup an internet connection so it can improve your TV watching experience. You’re likely going to have to enter your long WiFi security key with a remote control, which is going to be a hassle, but you only have to do it once. The first generation of these televisions are probably going to be immature and buggy, but LG will likely throw millions of dollars at marketing the fact that their televisions have a processor inside. The rest of the gang: Sony, Sharp, Samsung, etc., are going to want to add that future too, regardless if it actually enhances the consumer experience; they just want to give it a fancy name and add it to the bullet points on that little sheet of paper that sits under a television in a store next to the price tag.

It starts with televisions getting processing power and connectivity capabailities, your refridgerator is next, then your toilet, then something else, and again, and again. You’re not going to enter your WiFi key into these objects. I predict, and wrote an article on Vision Mobile, about consumer electronics makers going to operators and buying network connectivity in bulk so that you as a consumer literally just buy something, plug it into an electrical socket, and it’s already provisioned to connect to the network.

LG's biggest announcement of the CommunicAsia conference was the E71 lookalike, but a nugget has slipped out from their press...