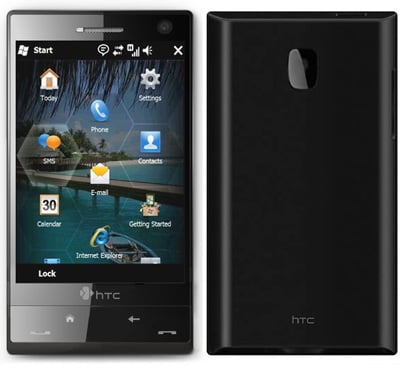 We had heard about the Firestone first in HTC’s leaked roadmap back in March, alongside a few specifications: 3.6″ WVGA display, 8 megapixel camera, Windows Mobile 6.5, 256 MB of RAM, 512 MB ROM, 600 MHz processor, running on GSM/HSPA networks and an estimated release date of September. Although the above rendering might be a little dated, we’ve got a few more features to tack on: 3.5 mm headphone jack, Wi-Fi, GPS, and G-sensor. In terms of style, the Firestone is looking a lot like the WiMAX-enabled MAX 4G, only with a smaller screen. Unfortunately, the Firestone is packing 900/2100 UMTS bands, so you won’t be seeing it in North America any time soon – however, if you’re living elsewhere and dig the look, the Firestone’s release date has apparently been moved up August.

Remember the Meizu M8? The iPhone clone that tries to do everything the iPhone can, but can't? Looks like Meizu...