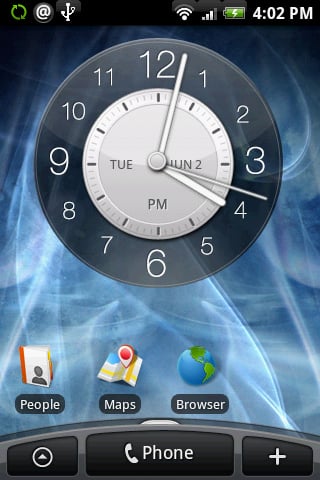 The HTC Hero, just unveiled today in the UK, is the new hotness in the Android world. More than just the latest and greatest Android smartphone from HTC, the HTC Hero represents the most usable and feature-rich Android phone that we’ve ever had a chance to put hands on. But, don’t be mistaken, the real genius behind the HTC Hero is the new customized Android OS user-interface that HTC is calling the HTC “Sense UI.” Think of it like this – the Sense UI is to Android OS as the TouchFLO 3D UI is to Windows Mobile Pro OS. And, seeing as how the HTC TouchFLO 3D UI – especially the latest v2 iteration – is almost unarguably the baddest UI overlay available for Windows Mobile, it makes sense (sorry, couldn’t resist) that the Sense UI rocks equally hard.

We first came to know the Sense UI as the custom “Rosie UI” that leaked alongside the HTC Hero not too long ago. We knew HTC was working on a custom user-interface for the Android OS, but we had no idea it would be so good. In fact, HTC’s Sense UI might be singly responsible for making the HTC Hero the first truly awesome Android phone to hit market.

The Sense UI takes the already impressive Android OS and customizes it with a widget-based interface that serves up at-a-glance information on multiple side-scrolling homescreen panes (think iPhone). The dedicated search feature trolls through your entire phone as well as online sources for the nuggets of information you seek. Your contacts’ information isn’t just served up from your on-board address book, they’re gathered from social networks like Facebook, Flickr, YouTube, and Twitter. And, with support for multi-touch inputs, the HTC Sense UI takes the Android platform head-to-head with the Palm Pre’s WebOS and iPhone 3GS’s iPhone OS.

Add in the fact that the HTC Hero is packed to the gills with all kinds of high-tech smartphone goodies (g-sensors, 3G, GPS, WiFi, 5-megapixel camera, compass, etc. etc.), and you’ve got the makings of what could be the first true iPhone killer from the Android camp. Stefan covered the Hero’s launch in glorious detail here.

Still, even with all that hardware, the HTC Hero’s defining feature is the Sense UI.

Look for the HTC Sense UI in the HTC Hero when it launches this Summer. There’s also talk of Sense coming to Windows Mobile, in some form. In which case, we could see TouchFLO taking a bit of a backseat to the Sense UI. Mobile Burn went straight to the source and has confirmed that Sense UI is not headed to Windows Mobile.

Google owes HTC a “solid” for helping boost Android OS to the next level. You know, the level where even gadget-overloaded geeks like us would shell out hard-earned dough to own a Hero of our own.

Earlier this morning, we reported on HTC's announcement of their new HTC Hero.  We posted a bunch of pics, video,...