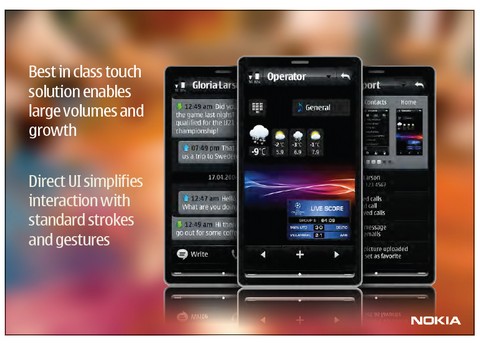 Scott Weiss, User Interface Technology Manager for The Symbian Foundation, recently said that S60 5th edition, the version that you see on current touch devices shipping from Nokia such as the N97 and 5800, is a temporary solution and things will change rather soon.

Back in April, the Symbian foundation blog said these two things will be included in Symbian^4 which is supposed to be feature complete this time next year, and be final by the end of 2010:

Krzysztof Choma, who is now unemployed, but used to be a Senior Software Engineer at Nokia for 3 months, and before that a Senior Software Engineer for Symbian for 2 years, confirms that the decision to kill Avkon, which is the codename for Nokia’s flavor of S60, has not yet been made and goes through the pros and cons of switching to Direct UI. The pros for taking Avkon behind the barn and putting a bullet in it’s brain are many: it’s old, maintaining it is costly and starting from scratch to compete with Palm and Apple is tempting. The cons: developers would have to rewrite their applications. Well boo hoo!

Direct UI, the replacement for Avkon, is built on top of Qt from what I can tell, and creating a Hello World application in Qt on Symbian takes 10 lines of code, where as for Avkon you have to import multiple classes and create several files.

Conclusion after all that technomumbojumbo: Touch versions of S60 are still going to look like the same S60 from 2002 when the Nokia 7650 came out, and Symbian is not going to be competitive, in the UI/UX department, until the end of 2010. Expect devices with the new UI to probably hit in 2011. When Steve Jobs said the iPhone was 5 years ahead of it’s time, he was not kidding.

[Screenshot above via SlashGear]