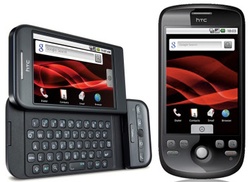 Rogers has done a little price-chopping on the HTC Dream and Magic… much sooner than I ever could have guessed. The Rogers HTC Dream and HTC Magic can now be picked up for only $99.99 on a 3-year contract, a drop of $50 from the original $149.99 price tag.

Is this a sign of weak sales and poor performance for the 2 first Android-powered handsets in Canada? Out of curiosity, I popped into a Rogers store yesterday, and asked how the Magic and Dream devices were selling… the answer from everyone in the store was a clear and concise ‘Terrible… we’re not selling many’. When questioned further, staffers pointed out to me that the current ‘hot’ device was clearly the iPhone 3GS. In fact, at this particular Rogers location, when the iPhone 3GS went on sale, a lineup ‘larger than we’ve ever seen’ formed outside of the store in hopes of nabbing a 3GS.

Hopefully for Rogers’ sake the price drop will lure in a few more customers. $99.99 seems like a great price to me (of course, I’d prefer FREE). Might be tough though… Living and working in Canada as I do, I can tell you this… Canada is clearly BlackBerry country… With the iPhone making gains fast and furious.

One more tidbit of Canadian mobile news before I take a breather over here. Best Buy Mobile has confirmed that...