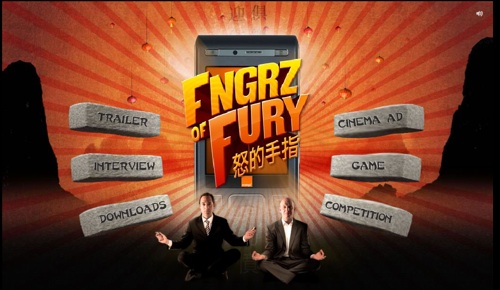 If you are based in the UK and attend the Cinema for viewing of films, you may well be familiar with the hilarious Orange Ads that have been running for some time now – no, I’m not talking about the somewhat lacking ‘Wicked Witch’ skit Ads that are on TV, but the Ads that are created largely to tell the audience to turn off their phones before the film (and jam the Orange logo in peoples’ faces!).

Well now there’s a new one – and it’s not just an Ad, but a whole interactive site too! FINGRZ OF FURY is a cunning play on the classic Martial Arts film “Fists of Fury”, and the Ad stars Juliette Lewis, along with the usual bigwig and sidekick characters we’ve come to know and love 🙂

So if you want to check out the cinema Ad (and you should) you can (a) go to the cinema or (b) click on this link, to go to the interactive site – once you are there, you can check out the other funky media they’ve got on the site, including a ton of 70’s Kung Fu sound effects for all your mouse clicks!

Over 700,000 of Orange's 2 million tracks had their DRM turned off recently, with the rest of the tracks in...