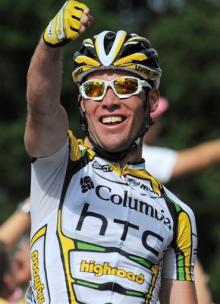 While the wide-world of cycling isn’t exactly included in our mobile-related beat, I figure HTC’s Tour de France cycling team is doing too well to ignore. Team Columbia-HTC has been seeing great success at the Tour de France, thanks to team rider Mark Cavendish. I won’t pretend to know too much about cycling (please tell me what a peloton is), but I do know a fast cyclist when I read about one. The Tour’s fastest cyclist this year seems to be Team Columbia-HTC’s very own Cavendish, who just managed to clinch his fourth stage win of the Tour. Cavendish’s Stage 11 win earned the rider the points lead and some sort of Green Jersey.

The HTC-backed Tour de France team saw its star rider claiming his eighth career Tour victory. Cavendish also managed to tie a British stage-record held by Barry Hoban. In fact, Cavendish’s win today was his second consecutive win of The Tour, despite predictions that had the rider finishing further back in the race.

Good luck to Team Columbia-HTC! When do we get our HTC Hero “Tour de France” Edition?

Certainly looks that way... at least, if you are inclined to believe 'spy shots'. My bud David over at TMoNews...